A new updated fare table has been published by the Air India. This updated fare list mainly to CG employees, State Govt employees and other eligible employees for availing Leave Travel Concession by air travel.

LTC Tickets: Change/Refund Fee will be as applicable for highest Business or Economy Class fare Reports regarding supply of Defective Ammunition by OFB

Subject: Reports regarding supply of Defective Ammunition by OFB

Respected Sir,
I am directed to bring the following for your personal attention with a request to take immediate cognizance.

The manufacture of arms and ammunition was regulated under a licensing system established by the Arms Acts (1959) and Arms Rules (1962) and was under Government domain.

The manufacturing of Small Arms for armed forces/paramilitary forces/police, have always been confined to the Department of Defence Production. Even after liberalization of the Indian economy and removal of licensing regime for major industries, the private sector was not allowed in this sector.

There are 95 firms licensed by the Ministry of Home Affairs, Government of India for the manufacture of guns (single barrel/double barrel) and 25 firms manufacturing cartridges (either blank cartridges or live cartridges or both) up to the quota permitted in their licenses.

The Department of Industrial Policy and Promotion (DIPP) obtained a decision from the Cabinet during 2001 – 2002 to allow manufacture of arms and ammunition in the private sector with nil or upto 26% FDI, and issued Industrial licenses to some firms in the private sector namely Max Aerospace, Bharat Forge, L&T and Punj Lloyd etc to manufacture arms and ammunition, but the MHA never cleared it basically due to security concerns.

However, during 2016, in a U-Turn and under the aegis of ―Make In India‖ The Government notified New Arms Rules vide GSR-701€ dt.15/07/2017 and permitted the Private Sector to set up manufacturing units for Small Arms and Ammunition.

The report further mentioned that several overseas defense companies — such as Expal of Spain, Nexter of France, Rosoboronexport of Russia, Chemring Group of the United Kingdom, Saab of Sweden, Elbit of Israel, Rheinmet all Defence of Germany, Diehl Defence of Germany, Denel of South Africa, Yugoimport of Serbia, Bumar of Poland, Orbital ATK Armament Systems of the United States and Arsenal of Bulgaria — are negotiating with
private Indian companies to provide cutting-edge technology for multiple Indian ammunition programs.

Press reports also indicate that a private player StumppSchuele Casings (SSC) Private Limited has decided to set up an ammunition manufacturing unit in Anantapur (AP) with an investment of Rs 1,020 crore.

The above was important to be mentioned because, the present report covers the entire range of ammunition covered under the RFI issued and hence a direct conspiracy to defame the OFB and create a favorable atmosphere towards the private sector stands established beyond doubt.

It may be pertinent to note that while OFB follows international best practices in QC, Quality is deeply ingrained in the Management practices in OFB, TQM is a major thrust area. Quality System Certification ISO 9001-2008, 14001-2004 have been obtained by all Factories.

The SOP on Quality Management Systems is an exhaustive document intricately ingraining every element and suggestions received from time to time from MoD, Raman Puri Committee etc.

OFB is being entrusted with 1st Party QA functions in addition to existing responsibility for input material inspection, as part of implementation of Raman Puri Committee recommendations on QA functions, in the pilot project mode.

The Ministry has considered the recommendations of Raman Puri Committee with regards to Quality function and Integration of Finance at factory level. In the first phase of the pilot project, 6 factories have been selected where OFs will be responsible and accountable for the quality of their products and DGQA will be responsible only for FAI (Final Acceptance Inspection).

ased on outcome of the pilot project, decision will be taken for expanding the scope of the project to other factories under OFB.‖

From the above it is abundantly clear that all the products are cleared only after strict quality check by the Factory and followed up by DGQA which is controlled by Army Officers.

Hence we fail to understand as to how one set of Army Officers pass defective ammunition for use by another set of Army Officers? However, you are requested to do the needful so that a certain percentage (1% to 5%) of each & every lot of ammunition supplied by OFB may be used by Army/Air Force/Navy without delay for the counter checking and insuring the quality of the product in the interest of stake holders.

Nevertheless, we reiterate that the present press reports are false, baseless and are a conspiracy to defame OFB and promote the private sector.

As a responsible stake holder, we request you to quash such unfounded allegations and ensure that OFB gets more funds to modernize its plants.

In this connection, we also inform that OFB has already adopted the global architecture in the age of Industry 4.0, suffice to mention that implementation of the cyber-physical system will facilitate fundamental improvements to the Industrial processes involved in manufacturing, engineering, material usage, supply chain, QUALITY and life cycle management of products.

Thus, the systematic tarnishing of the image of a dynamic and agile organization by vested elements in conjunction with a section of the press is not only condemned but is strongly protested upon.

We do hope you shall take cognizance of this and arrange to do the needful at the earliest.

Subject: – Regarding amendment of the Recruitment Rules for the post of Lower Selection Grade.

Department of Posts has proposed to revise the Recruitment Rules for the post of Lower Selection Grade. As per DoP&T OM No. AB 14017/6/2008-Estt.(RR) dated 13.10.2015, the proposed amendment in the Recruitment Rules is being put up in public domain for 30 days i.e. on the website of India Posts for inviting comments from stakeholders. ra o 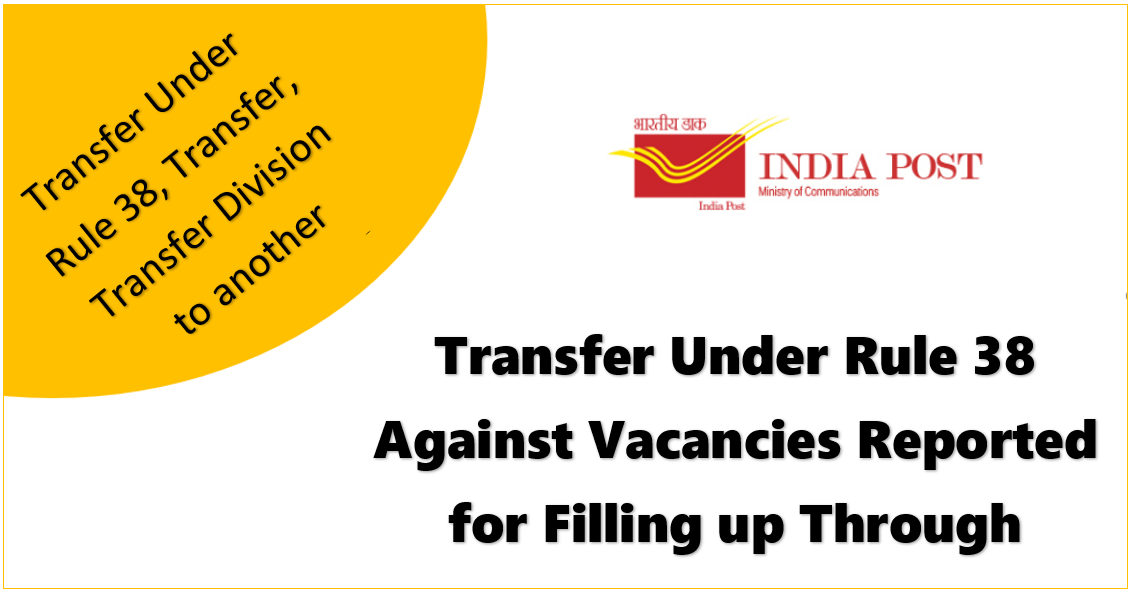 Subject: – Considering transfer under Rule 38 against vacancies reported for filling up through Direct recruitment examination conducted by Staff Selection Commission

Sir/Madam.
I am directed to refer to Directorate’s communication of even number dated 12.04.2019 on the above mentioned subject vide which all Postal Circles were requested to complete the one time exercise by 15.05.2019. It has now been decided to extend the timeline till 24.06.2019.

3. With regards to Point (iv) of Para 4 of letter dated 12.04.2019, it is further clarified that where recruitment is being done through SSC (i.e Direct recruitment of Inspector Posts / PA/SA / Stenographer Grade-II) change in vacancy position on account of transfer shall be communicated to the undersigned.

Provision of Local Language for engagement to GDS Posts – DoP 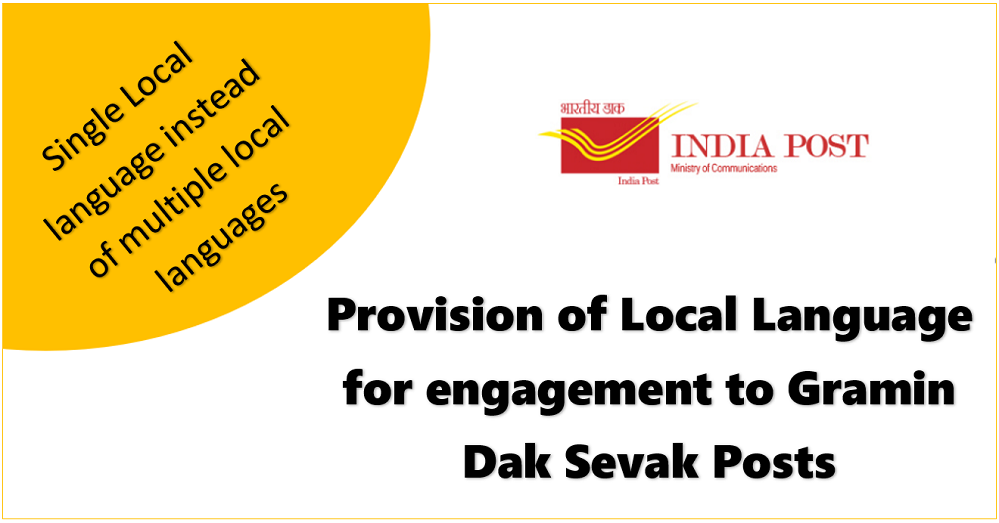 I am directed to refer to this Directorate letter No. 17-02/2018-GDS dated 08.03.2019 wherein para II (ii) of the orders, provision of local language for engagement to posts GDS was prescribed.

2. References have been received from Circles regarding facing of problems due to multiple languages decided vide Department of Posts order No.17-02/2018-GDS dated 08.03.2019.

Taking into consideration the problems being faced by the Circles and request for identifying only a single Local language instead of multiple local languages, the following modification has been approved by the Competent Authority:-

4. This issues with the approval of Competent Authority.