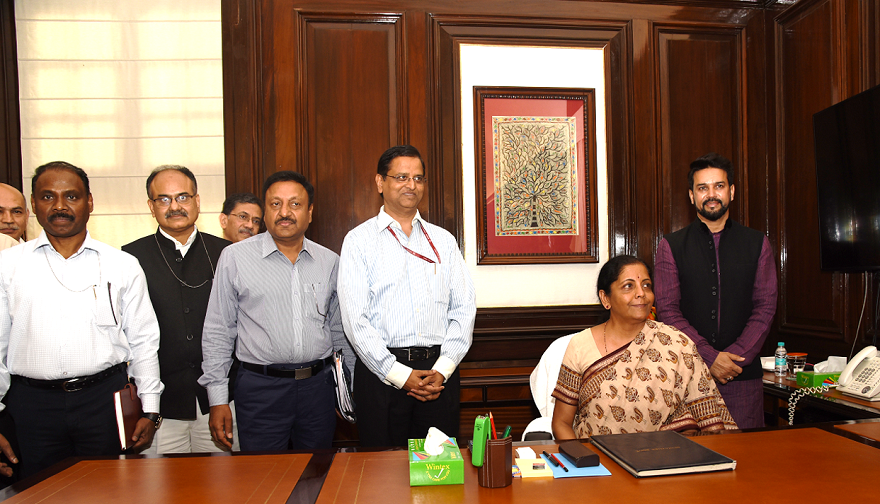 No.7(2)/EV/2016
Government of India
Ministry of Finance
Department of Expenditure

The second Table of Benefits for savings fund is based on a subscription of Rs.10 p.m. for those employees who had opted out of the revised rate of subscription w.e.f. 1.1.1990.

4. In their application to the employees of Indian Audit and Accounts Department, these orders are issued after consultation with the Comptroller & Auditor General of India.

5. Hindi version of these orders is attached.

Subject: Switch over form petrol and diesel vehicles to electrical vehicles for hired vehicles in Secretariats/Attached officer of Ministries and Department of Government of India located in Delhi

Keeping in view the policy thrust of the Government that by 2030 30% of the total vehicle elect in the country will be electrical for the reason of its being environmental friendly cost effective and substitute for fossil fuels Ministries/Departments are encouraged to switch over to electrical mobility from petrol and diesel cars in respect of vehicles taken on lease/hire for official purpose.

In cases where existing contracts for hiring of petrol/diesel vehicles have come to an and, Ministry/Departments may Consider fresh contract for hiring electric vehicles.

Ministry/Departments are at liberty to amend the conditions of the agreement as per the type of lease/hiring (Wet or Dry) entered into with the service provide.

Subject: Compensation for non-deposit or deposit of contribution Under National Pension System during 2004-12

The undersigned is directed to invite attention to the guidelines issued by Controller of Accounts, Ministry of Finance, Department of Expenditure, vide OM No.1(7)/2003/TA/Part file/279, dated 02.09.2008 for streamlining of procedure for remittances of contributions under the National Pension System (NPS) by PAOs/CDDOs and NCDDOs which provides, inter-alia.

The detailed procedure for the purpose of crediting of the NPS contributions to the NPS Trustee Banks so as to ensure that the contribution is credited to the NPS regulatory system as the timelines prescribed therein without delay.

(a) In all cases. where the NPS contributions were deducted from the salary of the Government employee but the amount was not remitted to CRA system or was remitted late.

The amount of installment may deducted from the salary of the government employee and deposited in his NPS account. The sane may qualify for tax concessions under the Income Tax Act as applicable to the mandatory contributions of the employee

3. In pursuance of the aforesaid provisions of the said Notification dt. 31.1.2019. all the are required to ensure that the decisions. as contained therein insofar as these relate to the issue of delayed credit of NPS contribution to CRA system, are carried out in respect of Central Government employees under their administrative purview in consultation with the concerned Financial Advisers and the respective pension accounting organizations.

4. While carrying out the above decision contained in the afore notification dl- 31.12019, it has to be ensured that the modalities for implementing the same are uniform across the account ting organizations and, therefore, for this purpose, the office of Controller General of Accounts of this shall be the nodal organization for laying down the modalities.

Accordingly. the office of controller General of Accounts shall issue guidelines for the purpose. The concerned Financial Advisor shall be the central pint for the purpose in the respective Ministries/ Departments.

5. It is likely that the concerned Ministries/Departments need data and information from the Central Record keeping Agency, namely, NSDL, to carry out the above decision in of employees under their administrative domain.

In order, therefore, to facilitate such action by the Ministries/Departments. the CRA shall look into its record and in all cases which are covered under the decision contained in the aforesaid

Notification dt. 31.12019, it shall on such employee-wise details, on its own, to the concerned Head of the Office and DDO/PAQ where the employee is currently posted within 15 days of the date of issue of these orders So that the desired and timely action gets initiated by the

6.In their application to the employees working in the Indian Audit & Accounts Department, these orders issue in consultation with the Office Of Comptroller & Auditor of India.

7.Hindi version of this order is attached.

(PUBLISHED IN PART I SECTION 1 OF GAZETTE OF INDIA)
F.No.5(2)-B(PD)/2019
Government of India
Ministry of Finance
Department of Economic Affairs
(Budget Division)

It is announced for general information that during the year 2019-2020, accumulations at the credit of subscribers to the General Provident Fund and other similar funds shall carry interest at the rate of 8% (Eight percent) w.e.f. 1st April, 2019 to 30th June, 2019. This rate will be in force w.e.f. 1st April, 2019. The funds concerned are:

2. Ordered that the Resolution be published in Gazette of India.

Bunching of Pay as per 7th CPC to Railway Employees

Please refer to Board’s letter of even no. dated 27.09.2017 forwarding therewith a copy of Ministry of Finance, Department of Expenditure’s OM No. 1-6/2016-IC dated 03.08.2017 regarding clarification on bunching of stages in the revised pay structure under CCS(RP) Rules, 2016 for adoption of the same in Railways with respect to RS(RP) Rules, 2016.

Now, Ministry of Finance, Department of Expenditure vide their O.M. No. 1-6/2016-IC/E-IIIA dated 07.02.2019 (copy enclosed) have issued further clarifications on the subject matter.

The clarifications issued by Ministry of Finance, Department of Expenditure shall be applicable mutatis mutandis in Railways with respect to RS(RP) Rules, 2016.